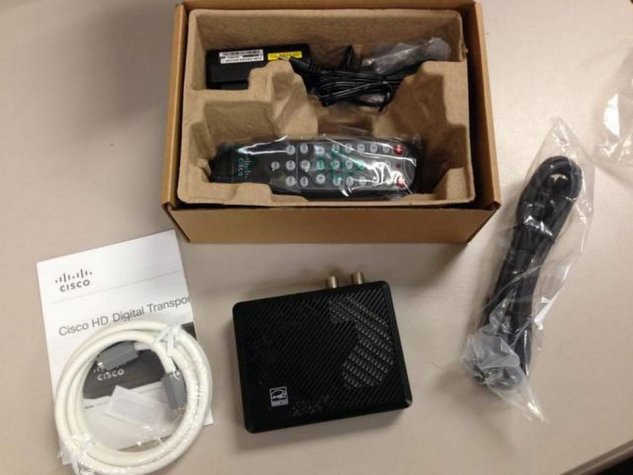 The Time Warner Cable office on Fair Lakes Road in DeWitt. By June 2016, the company's customers in Central New York will need a converter box or digital adapter on all of their televisions to continue receiving a TV signal.

Syracuse, N.Y. — Time Warner Cable customers in Central New York are going to need a converter box or digital adapter on all of their televisions by June to continue receiving a TV signal.

The switch means that, by June, all Time Warner Cable customers in Central New York will need a set-top converter box or digital adapter on all of their televisions because the company plans to encrypt all of its digital signals. Customers no longer will be able to receive a television signal by directly connecting their televisions to a cable line without first hooking the line to a piece of Time Warner equipment.

Time Warner Cable customers in Central New York will need a set-top box or a digital adapter like the one pictured above on all of their televisions by June 2016 to continue receiving a TV signal. The switch is part of the company's transition to all-digital service.Time Warner Cable

That will mean extra fees for customers. Time Warner charges $11.75 a month for a converter box, which allows customers to receive all of the digital channels they subscribe to. It charges $3.25 a month for a digital adapter, a smaller, simpler box that provides access to a limited number of channels.

Devices that use the free TWC TV app — including Roku, Xbox 360 and Xbox One, Samsung Smart TVs, and CableCARD-enabled devices including TiVo — will also allow Time Warner Cable customers to continue viewing all channels.

The company has said it will provide its existing TV customers with one or more digital adapters free of charge through at least June 29, 2017. After that, they will have to pay the monthly charge. (To qualify for the free period, customers must order their digital adapters by Oct. 22, 2016.)

Time Warner could eliminate the need for converter boxes and adapters by not encrypting its digital signals. Unencrypted signals can be processed by the QAM digital tuners that come with most televisions sold in recent years.

Company spokeswoman Nathalie Burgos said encrypting all TV channels will allow the company to provide "a better customer experience" because it will allow customers to install services more often without a technician visiting their homes.

Encryption also reduces the pirating of the company's cable television signals, a problem that "drives up the cost of cable for paying customers, " she said.

At the same time it makes the switch to all-digital, Time Warner will be substantially boosting Internet speeds for its Internet customers:

• Residential customers who subscribe to Time Warner's standard Internet plan will see their speed increase from 15 Mbps to 50 Mbps.

• Those with the company's "extreme" plan will see an increase from 30 Mbps to 200 Mbps.

Time Warner said the switch will allow it to boost Internet speeds by freeing up bandwidth now used by analog signals. Each analog channel takes the space of three to four high-definition channels, according to the company.

The changes will affect all Time Warner Cable customers in Syracuse and its suburbs, along with the following central and northern New York service areas: