I originally purchased my Apple 30-pin Digital AV Adapter to mirror whatever’s on my iPad 2 or iPhone 4S screen to my TV screen and for a year or two, it worked...

Cable one all digital 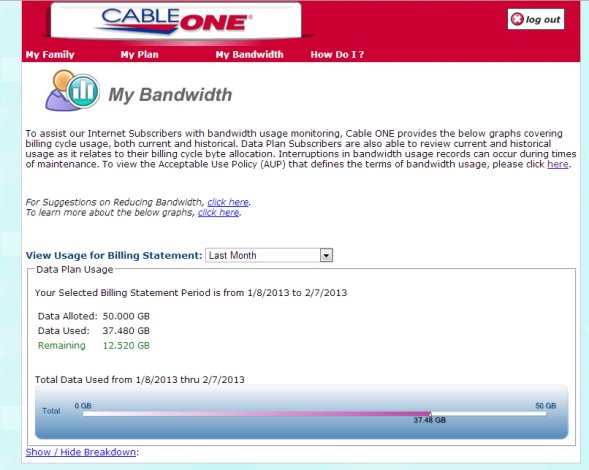 We have been experiencing higher than normal bandwidth usage with Cable ONE since last August of 2015. We have received two notices from Cable ONE that we have exceeded our monthly allotment of 300GB for two months in a row (that's a maximum of 10GB/day). Looking at the history of our usage, we have exceeded 300GB almost consistently since last August, and our Internet usage habits haven't changed that we are aware of. In fact, August was the first month when this happened. We were consistently under 10GB per day for all previous months of this year. In August, we were on vacation for two weeks and our bandwidth usage shot up over 500GB for that month.

Being concerned about our bandwidth usage, we tried for two days to limit our usage both on the computer and on the TV - and it didn't seem to make a difference as our daily usage was consistently over 10GB/day. That forced us to increase our bandwidth through Cable ONE from 300GB to 500GB at a cost of an extra $50/mo (that's a maximum of 16GB/day). And we are still experiencing occasional usage in excess of 20GB/day when doing almost nothing on the computer or the TV.

Suspecting that a neighbor might have gained access to our Wi-Fi, we also changed the password on our home Wi-Fi (believe me, it has always been a very secure password), and it did not help reduce the high usage. I have a bandwidth monitor app on all my devices now. Yesterday (12/18/15), I was on Facebook for about an hour on my iPhone. That one hour of Facebook used 1GB of bandwidth. Watching a one hour Hulu episode on my iPhone used 3GB, and it wasn't even HD. There's no way that I'm going to be watching video clips on YouTube or Facebook anymore just for the fun of it. We are going to cut back to the 300GB next month and we're going to drop Netflix and Hulu and get all our news from text and even restrict how much graphical content we access on the Internet. The cost of entertainment isn't worth it to us.

We have five computers at home, two iPhones, and one iPad. These get updated often. I've discovered that it uses up to 2GB per computer to update Mac's OS, and I've yet to find out how much bandwidth is used to update my apps. And then I have Windows on three of those computers that also get updated frequently. Just using my computers and keeping them updated can push me over the daily limit, and that means cutting back on entertainment for that day. It really isn't worth it. So now I am also stopping automatic updates on the computers and iPhones/iPad and limiting it to just one update per month at most, and maybe even less. So far for the month of December (2015) we have 13 days left and have already used 50% of the now 500GB bandwidth, and this by being very frugal with our Internet usage.