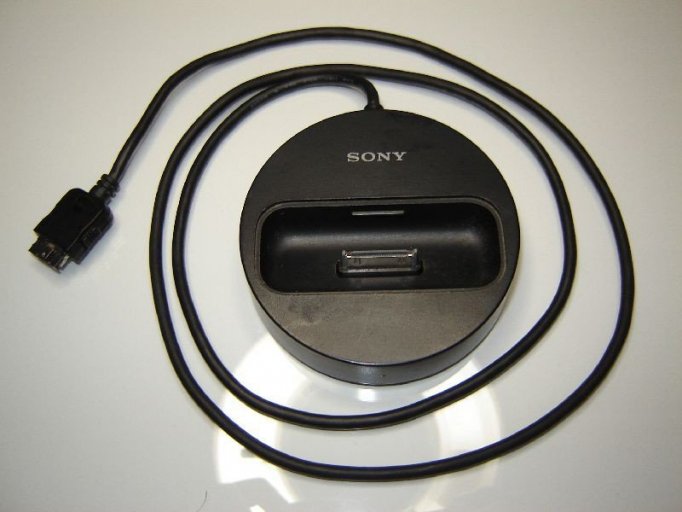 New to Sony's 2007 line of AV receivers and home-theater-in-a-box systems-both the Bravia and the component-based lines-is the Digital Media Port (or DMPort), a proprietary jack that offers connectivity to any of four optional accessories. The quartet of compatible add-ons include the TDM-NC1 (a Wi-Fi music streamer), the TDM-BT1 (a Bluetooth adapter), the TDM-NW1 (a dock for certain Sony Walkman MP3 models), and the TDM-IP1 (an iPod dock). By offering the adapters as optional accessories, Sony theoretically keeps the cost of the main units down, but still allows users a "choose your own adventure" option for the digital-audio source of their choice.

The TDM-IP1 is Sony's version of an iPod dock with the added bonus of onscreen display support, which lets you navigate your music collection on the TV screen using your audio system's existing remote. The TDM-iP1 supports every iPod with a dock connection except the third-generation models, and it features an adjustable plastic rear support to accommodate thickness of the varying iPod models. The unit itself has a glossy-black finish with a chrome trim base. The single 72-inch cable plugs into the DMPort jack on the aforementioned compatible Sony receivers and HTIBs; there's also a minijack video output (and included composite video cable) for viewing the onscreen display and for watching videos and photo slide shows on compatible iPods.

Once the TDM-IP1 is connected to the Sony audio system, you simply plug in your iPod and press the dock's single button to toggle into the preferred operating mode: OSD mode (noted by a green LED) will allow you to use your receiver's remote to navigate and control your music via a TV-based menu screen, while iPod display mode (indicated by an amber LED) will let you manually choose songs, photos, and videos on your iPod as well as allow for photo and movie playback. Put another way, you can access all your songs from the comfort of your sofa, but watching videos or photos requires you to walk over to the iPod and manually dial up your choices without the benefit of a remote.

The onscreen display isn't the prettiest interface in the world, but it worked as we'd expect. You have onscreen access to all of the control features you'd get using the iPod by itself, including shuffle and repeat. Unfortunately, using the Sony remote is a big step down from the iPod Click Wheel. There's no way to scroll quickly through lists, for instance, so getting to those artists at the bottom of the alphabet will take a while; a button that could act as a "page down" function would have been a nice touch.