HDMI Versus Component Video -- Which is Better? 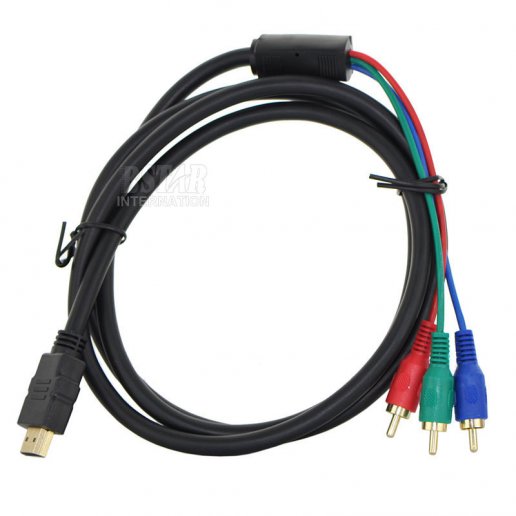 As HDMI cable connections become more and more widely used, we are often asked: which is better, HDMI or component video? The answer, as it happens, is not cut-and-dried.

First, one note: everything said here is as applicable to DVI as to HDMI; DVI appears on fewer and fewer consumer electronic devices all the time, so isn't as often asked about, but DVI and HDMI are essentially the same as one another, image-quality-wise. The principal differences are that HDMI carries audio as well as video, and uses a different type of connector, but both use the same encoding scheme, and that's why a DVI source can be connected to an HDMI monitor, or vice versa, with a DVI/HDMI cable, with no intervening converter box.

The upshot of this article-in case you're not inclined to read all the details-is that it's very hard to predict whether an HDMI connection will produce a better or worse image than an analog component video connection. There will often be significant differences between the digital and the analog signals, but those differences are not inherent in the connection type and instead depend upon the characteristics of the source device (e.g., your DVD player) and the display device (e.g., your TV set). Why that is, however, requires a bit more discussion.

What are HDMI and Component Video?

HDMI and Component Video both are video standards which support a variety of resolutions, but which deliver the signal from the source to the display in very different ways. The principal important difference is that an HDMI cable delivers the signal in a digital format, much the same way that a file is delivered from one computer to another along a network, while Component Video is an analog format, delivering the signal not as a bitstream, but as a set of continuously varying voltages representing (albeit indirectly, as we'll get to in a moment) the red, green and blue components of the signal.

Both HDMI cable and Component Video cable deliver signals as three discrete color components, together with sync information which allows the display to determine when a new line, or a new frame, begins. The HDMI cable delivers these along three data channels in a format called T.M.D.S., which stands for "Transition Minimized Differential Signaling." Big words aside, the T.M.D.S. format basically involves a blue channel to which horizontal and vertical sync are added, and separate green and red channels (though HDMI can also be configured to use "color-difference" colorspace-see below).

Component Video is delivered, similarly, with the color information split up three ways. However, component video uses a "color-difference" type signal, which consists of Luminance (the "Y", or "green, " channel, representing the total brightness of the image), Red Minus Luminance (the "Pr, " or "Red, " channel), and Blue Minus Luminance (the "Pb, " or "Blue, " channel). The sync pulses for both horizontal and vertical are delivered on the Y channel. The display calculates the values of red, green and blue from the Y, Pb, and Pr signals.

Both signal types, then, are fundamentally quite similar; they break up the image in similar ways, and deliver the same type of information to the display, albeit in different forms. How they differ, as we'll see, will depend to a great extent upon the particular characteristics of the source and display devices, and can depend upon cabling as well.